First off this is a beautiful game in more way than one.

So, let’s have a look at what we get in the box. You get 16 beautifully decorated cards, 13 Tokens of Affection, 4 reference cards and 1 small yet perfectly formed instruction booklet. That’s it, all you get. and yet for what seems like so little you get a lot of fun.

The theme has been well thought out with all your favourite characters present, we’ve got (among others) Finn and Jake, LSP, Marceline, The Ice King, and of course, the main show Princess Bubblegum, who we will all be trying to get our love missive to with all the vigour of vying for the last piece of chicken in a KFC family bucket. The cards have all had some wonderful work put into them and are all given a level between 1 and 8. The characters have all been placed in period costume, in keeping with the feeling of the original version of Love Letter and gives a feeling an old fashioned romance story (think Cyrano De Bergerac meets Cartoon Network). The tokens of affection have been adapted as well, the wooden red cubes of the original version have been replaced with odd shaped multi-colour plastic tokens, another well thought out addition in keeping with the theme.

The instructions are really clear, concise and small. A sign of a good game is short yet clear instructions in my opinion. They even include little quick reference cards for each player, though all the cards state on them what they do when discarded the reference cards do come in handy for learning what all the cards are and what they do. Once you know all the different cards (there are only 8 different things that they do) you can probably leave them in the box.

The play goes in rounds, at the start of the round you receive one card each with a draw pile in the middle. When it comes to your turn you pick up one card put in your hand and choose which of the two in your hand you would like to discard, each card having a different effect when discarded (the cards all state on them what they do, and any further clarification can be found in the rules booklet). The end of the round occurs when there are no more cards left, with whoever has the highest number on their card winning the round. They get their letter delivered to the princess and receive a token of affection in return. The end of the round can also occur before this if all players bar one gets knocked out due to the cards played. The winner of the game is declared once one player gets to 4, 5 or 7 tokens of affection collected, depending on how may players there are. 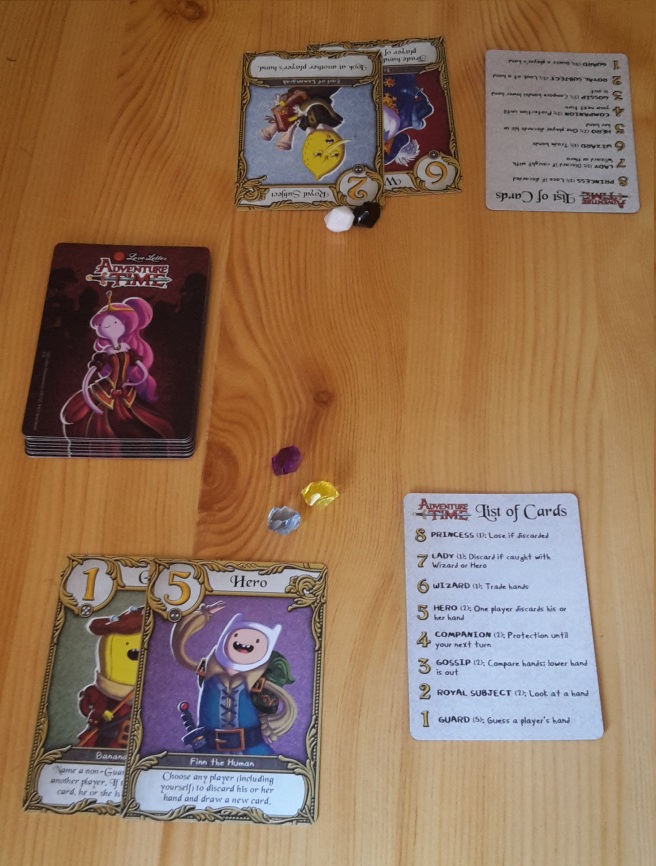 The pick a card and play a card nature of the game makes it beautifully simple. There is only ever one choice to make each turn, and yet it can be an agonisingly hard one at times. With The Gossip (level 3) card you can choose another player to show your hand to, whoever has the lower number gets knocked out the round, sometimes this can be a dead cert if you have The Princess (level 8, the highest level) or risky business if your other card is only, say The Hero (level 4), there’s a good chance your opponent has a higher value card. There are cards that can protect you from other player’s conniving plans, there are cards that can help to ruin other people’s plan. It’s so simple, you can pick it up and be playing within a few minutes, and yet as is often the case with it’s simplicity out comes the complexity of the decisions you have to make.

Depending on what cards pop up the round can last a few seconds or several minutes. The quick rounds make it a quick game, less than 30 mins so, along with it’s small but mighty size it’s great to take with you and have a little game on a long journey, or if you’re having a picnic in the park, a quick pint down the pub, or as a starter game for a games night!

Over all this is a great small game. it’s so simple to pick up and yet it can be taxing as you’re trying to guess what cards your opponents have and which card would be best to discard. It’s a great game for kids, (the box says 10+ but I would say that kids a bit younger than this would be able to play and enjoy it too) especially this Adventure Time version or even just a time filler or as a starter game for a big games night.  I highly recommend Adventure Time Love Letter. The game play is the same as the original so if Adventure Time is not your bag there are various other versions like Batman, The Hobbit and the good ol’ original version to choose from too.