I remember a time when I had hope in my life. A time where I would feel the sun beating down on my face, a cool breeze rustle through the trees, delicately brushing against my skin, and I would feel joy and elation at a bright new day. But after wading my way through the dank swamp of Nicolas Cage’s worst films, I now feel devoid of a soul, which is now something i have in common with Johnny Blaze, the protagonist (and a bit of a wanker to be honest) of our final film in the Naff Nic Season, Ghost Rider: Spirit of Vengeance.

Ghost Rider is not something I really had an opinion about when the first film was released back in 2007. The comics were something that had passed me by like light mist in the distance as I was too busy trawling through the various Punisher volumes and anything Ed Brubaker or Garth Ennis pumped out. The film adaptation of Ghost Rider was derided by the fans of the comics on release and mauled by critics. I, on the other hand, found it a mildly diverting couple of hours in between handfuls of cold chicken nuggets.and reheated chips. It wasn’t the best film I had ever seen nor was it certainly the worst (hello Beaches), so when I was tasked with watching the sequel for this particular challenge I was neither fearful nor elated.

In hindsight, I probably should have been a bit more apprehensive as thus far most of the films I have seen for this challenge can easily have dual use as items of torture or to incite riots (put Deadfall on constant loop in Durham prison and i can guarantee it will cause some ructions). But I trundled on in, like a blind man stumbling into a cheese shop, feeling for a strong cheddar only to find a rotten, leaking camembert. 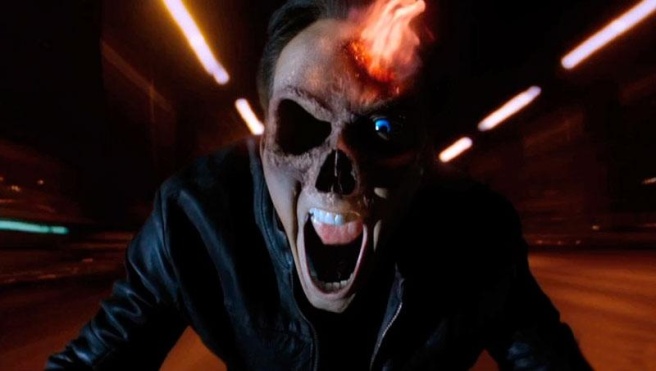 Cage returns as Johnny Blaze/Ghost Rider, the stupid idiot who made a deal with a demon and ended up with a flaming skull of a head as some sort of benefit, but this time we find him in hiding as his Ghost Rider persona has become increasingly difficult to control. He’s offered a possible way out of his problem by some foisty monk called Moreau (Idris Elba), who promises him freedom if he is able to save a young boy called Danny from the hands of Mephistopheles, who we saw in the first film as Peter Fonda but is now inexplicably played by Ciaran Hinds even though Fonda was interested in reprising his role. As you can see the plot is so thin it borders on anorexic, rehashing the old ‘save the boy, save yourself’ trope from countless other heroic Hollywood films.

It’s no surprise to see that one of the writers involved in Spirit of Vengeance is David S. Goyer who, when on form can crack out a decent screenplay i.e. Dark City, The Dark Knight Rises, but somehow manages to puncture these moments of greatness with great big pins of solid shit i.e. Zig Zag, The Unborn. Spirit of Vengeance is one of his glorious fecal points. The script is weaker than my gran’s knees, messy to point of incoherence, which is easy to understand when you discover there are three (three!) screenwriters who had their paws on this screenplay, and there are some truly weak attempts at Schwarzenegger-esque humour smattered around the action sequences, that may have worked if Ahhhnold had been involved but instead are just embarrassing and at odds with the darker nature of the plot.

Cage’s performance is on the milder side of crazy. Not as googly as Vampire’s Kiss, not as dead behind the eyes as Left Behind, however, it feels oddly predictable. As we watch him scene to scene, you can almost see where he is going and what he is trying to do before he has even done it which is a massive shame as a big draw of watching a Cage is his sheer unpredictability. His fervent declaration post-Spirit of Vengeance that he wasn’t interested in doing any more Ghost Rider films may hint that he wasn’t having all that much fun filming the sequel. The rest of the cast are perfunctory, though it was nice to see Christopher Lambert pop up for a few minutes with a bald head and a sword (anyone involved in the first Highlander film are tops in my opinion and deserve endless cameos in all films), and Ciaran Hinds makes a fair fist of replacing Fonda, giving Mephistopheles/Roarke a more booming presence. For some reason, Idris Elba agreed to be in this, maybe to facilitate the purchase of a new Lexus or maybe to make a film that pushes The Reaping close to being the worst thing on his reasonably varied c.v, either way he does his bit, running about in a robe looking attractive.

For a film with a budget hovering around the 60 million dollar mark, the special effects and CGI in this film are laughable. The rendering of Ghost Rider’s skull is like something from a Playstation 2 game, and the achingly sad scenes of CGI usage in the stunts is enraging. I hope the special effects creators and technicians got a box of chocolates with ‘You tried’ written on the underside. 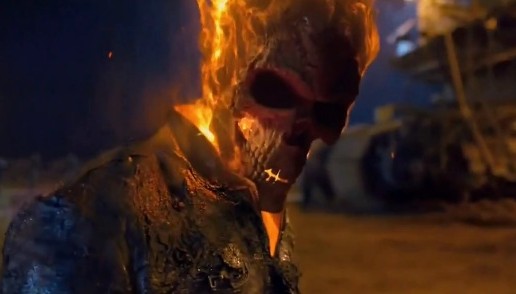 I genuinely don’t think Ghost Rider: Spirit of Vengeance seeks to be a good film in the true sense of the word. For me, it seems to aim to fill that ‘entertaining trash’ tick box but unfortunately it only succeeds in being shockingly shite (in the true sense of the word). If you thought the first Ghost Rider was an affront to the comics then you really should not see the second one. While the first film had its moments with some nice spiky exchanges, especially between Cage and Eva Mendes’ characters, and some decent action set pieces, the sequel is hollow, devoid of fun and bogged down by its hackneyed attempts at exposition. Nobody is having fun here, the audience included.

One thought on “The Naff Nic Season: Ghost Rider: Spirit of Vengeance (2011)”