As we groan in abject disdain as Hollywood pumps out more and more seemingly pointless remakes (hello Robocop and the-stuck-in-development-hell Highlander) we are in danger of losing sight of the fact that sometimes the remake can actually improve on the original. Yes, the percentages are low, for every Coen Brothers True Grit there is a bargain basement Get Carter, but remakes can sometimes surprise us, adding a new dimension to an old story, and in some cases (which there are two of on this list) new technology and visual effects can provide a more visceral experience.

I admit, I am a little bit of snob when it comes to remakes, especially those that don’t seem have a point to it; doing a remake for the sake of ego boosting or raising the profile of a particular actor/director makes absolutely no sense to me, there has to be an advance or something fresh whether it be political, technological, sociological, whatever… that the original either was lacking or fudged in the first place.

So here we are, my own personal top 5 remakes that were better than the originals. 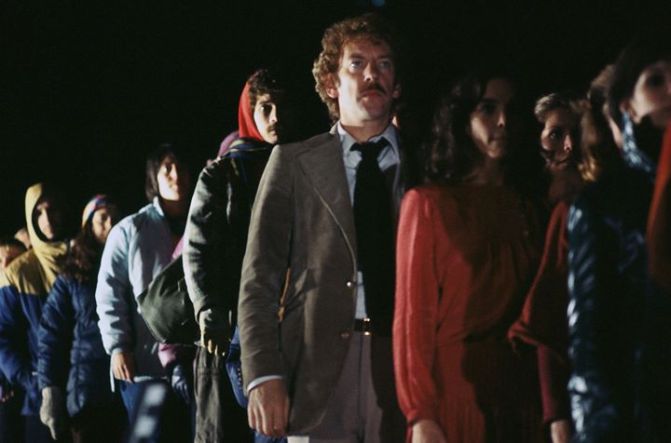 The 70s remake of ‘Invasion…’ is on every single one of these remake lists and usually at the top. The reason being because it is absolutely bloody marvellous. The original ‘Invasion…’ was released in 1956 and dismissed without fanfare by the critics but as time as passed it has been widely re-assessed as an allegoric masterpiece tapping into the paranoia and fear of the US populace during the rise of communism and the Soviet Union. The remake keeps the main themes intact, the dangers of conformity, or not asking questions of those around, of just blending into the crowd, of someone exerting complete control over your mind and body, but ramps up the visuals with some deeply disturbing and Cronenberg-esque body horror (see the scene in the garden with Donald Sutherland and bunch of replicated bodies writhing on the grass). And that final scene, oh that final scene, hopeful at first and then horrific afterwards, I dare you to find a closing scene that gives you such a conflicting shock of emotions. Also you get a very, very youthful Jeff Goldblum and Donald Sutherland with a moustache and perm. I don’t know what much more you would need.

A remake of an adaptation of book that has its own prequel, The Thing has its origins and tentacles all over modern cinema, but John Carpenter’s 1982 sci-fi horror is unparalleled in both technical achievement and as a perfect example of how to execute a simple plot in one location with small band of actors. We all know from a previous post how much i admire Kurt Russell and his glorious beard, but credit also has to go to the supporting cast, specifically Keith David as Childs and Donald Moffat as Garry (who has a cracking one liner during the tense blood test stand off). Like ‘Invasion…’ above, the main progression from the original is the special effects. Rob Bottin and his team create some effects and pieces so disgusting and strange that it’s both mildly stomach churning yet extremely difficult to look away. The Thing is not a complex watch but is a compelling one, and again like ‘Invasion…’ and all good sci-fi horror films, the ending is bleak but open for endless theorising, and I am not ashamed to say that I have watched the videos and read the message boards about whether or not Childs or MacReady or either of them is The Thing at the end (and it’s a heck of a rabbit hole).

A remake of the Hong Kong crime drama Infernal Affairs, The Departed is absolutely rammed to the gills of all the actors the Scorsese had on speed dial, apart from De Niro who was probably off making a shit comedy because he is De Niro. You’d think with all that talent, and egos probably, that The Departed would possibly sink under the weight but this is Scorsese and he is the king of keeping an ensemble cast in check (I’m guessing by boomeranging his eyebrows if one of them gets a bit feisty). This is one of those remakes that sort of doesn’t have a point to it apart from it being adapted from the Far East in order to suit the American market and usually that just doesn’t work (I’m looking at you Oldboy and Dark Water), but The Departed is one of those rare occasions  where everything just works. Damon and DiCaprio are the two sides of the same coin with Jack Nicholson, as unpredictable as ever, flipping between the two of them. The supporting cast is sublime (the scenes with Alec Baldwin and Mark Wahlberg out-yelling and out-swearing each other is worth the price of a dvd alone), the script has some wonderfully ornate foul language and strong twists and turns, and while it does run on a little long, The Departed just pips Infernal Affairs in high crime drama stakes.

Of all the body horror films The Fly is the one that stays with me the most, probably because it’s the most…. juicy. A remake of the 1958 film, it sticks to the core plot of mad scientist mixes atoms with a fly after a cross-contamination incident but takes the gore and excess to new heights. There’s acid vomit, a maggot baby, Jeff Goldblum (who obviously has good taste in sci-fi because this is his second appearance on this list) falling apart in the most grotesque manner possible, and some phenomenally vile set pieces. The 1958 version was shocking at its time, the visual effects disturbed and appalled in equal measure, but watching it now it’s almost amateurish, so Cronenberg’s remake is a prime example of how advancing technology aids and gives reason to a great remake.

I’m being bold here and letting you all know that I am not a fan of musicals. Most musicals bring me out in a serious case of hives. Just give me drama, give me comedy, don’t sing it at me. Ya dig? However, I will let Little Shop of Horrors through my musical defences. A remake of a Broadway musical which in turn was based on Roger Corman’s 1960 film, Little Shop of Horrors is an absolute blast. With its tongue firmly in cheek, it presents the story of sad old Seymour and Audrey, desperate to escape the NYC slum and end up in the possession of a strange plant that feeds on human blood. What follows is a bizarre, amusing and pleasingly camp 90 minutes with some wonderful musical song and dance routines, and some glorious cameos from Bill Murray and Steve Martin. The original 60s film wasn’t a musical at all, just a very low budget black comedy and it did work, but when presented with the 80s form with musical additions then you realise that this remake is exactly what Little Shop of Horrors needed.