So I’ll start by saying this will contain spoilers, I honestly don’t know how to talk about this book without spoiling pretty much everything. You’ve been warned! 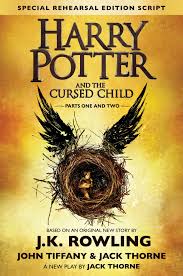 If you’ve read any of my blogs before or if you’ve ever met me in real life, you’ll be aware that I’m Harry Potter mad and knowing I was counting down the days until the new book was released, won’t surprise you. If you’ve never read a blog and don’t know me then all I can tell you is that I love the Harry Potter series so much that I got a pair of glasses and a lightning bolt tattooed on me.

As soon as I found out Harry Potter and the Cursed Child would be released in book form, I jumped on Amazon and pre-ordered it. As soon as the book was posted through my door, I read it and I did so within a 24 hour time frame – something I haven’t done in a long time… Probably not since The Deathly Hallows was released.

So where do I start with my review other than gushing about how much I loved it? Well in case you didn’t know, The Cursed Child follows Harry’s middle son, Albus, as he embarks on his own adventures in Hogwarts. Albus soon realises that Hogwarts isn’t all that fun when you have Harry Potter, the greatest wizard of all time, as your father and living in his shadow is pretty hard.

Now, once again, if you haven’t read the books, you might want to stop reading. Some major spoilers are coming up.

I started crying at the very beginning, as the script picks up where the last book left off, I suddenly found myself overwhelmed with memories of how it felt to be reading the final Harry Potter book and that bit where Harry says ‘Albus Severus, you were named after two of Hogwart’s greatest headmasters’ (this may not be the actual quote, my copy of the book is currently packed up in a box somewhere) will forever make me cry.

Now I loved everything about this book, to start with the jobs that the adults have… Hermione as Minister of Magic? Yes please! If there’s a role Hermione was made for, it’s minister. She’s perfect for the role, she has seen how previous Ministers have coped with some of the worst events in history and she seems to have learned from their mistakes. I love that Ron is working for Weasley’s Wizard Wheezes, I’d previously read that he was an auror after Hogwarts and for me the job just never suited him. Although Ron is a great wizard, I love him being the slightly silly fun one of the group and a minsirty job just didn’t seem right to me. And of course Harry becomes head of magical law enforcement, he was always destined to be great and a mediocre job just wouldn’t have worked for him.

The star of the show (or script) has to be given to Scorpius Malfoy, after Albus is sorted into Slytherin, he becomes best friends with Scorpius who is just adorable. Scorpius has heard rumours that he is actually Voldemort’s son after a time turner has been used in order to ensure Voldemort produces an heir, now Scorpius isn’t sure what to think of these rumours and constantly worries they’re true. Along with this Scorpius is just a really lovely kid, he’s bullied for potentially being Voldemort’s child but he never seems angry at the other kids in school and he’s nothing but lovely to others around him.

Albus on the other hand, is sometimes pretty annoying. He resents his father for being so perfect and constantly seems angry. At first I didn’t like this and I got annoyed at Albus for not realising that his father was forced into being a hero but as I began to read, I began to understand Albus and I started to sympathise. I realised that he just wanted to live the same life that his father had, he wanted to show people that he could be just as great as his father but unfortunately he doesn’t seem to be very good at most magical things so he finds it harder than he hoped.

After overhearing a conversation between his father and Amos Diggory, Albus decides he will go back in time with the help of a time turner and he will try to save Cedric Diggory’s life. With the help of Scorpius, he goes back to the Triwizard Tournament and changes two things in the hope that Cedric will win and therefore will never touch the portkey that eventually leads to his death. I LOVED this aspect of the book, the two changes bring about two alternative realities, one where Ron and Hermione never quite get together and one where Voldemort wins the battle of Hogwarts. These brought up ideas that I had previously thought about. The idea of a reality where Voldemort had eventually won was really intriguing to me and I thought it was done incredibly well.

The book was pretty light and it felt very easy to read, after about forty pages I knew that I wouldn’t be putting the book down until I was finished and I was so glad that I took the time to read until the end. Overall, the book was pretty much just one big fan fic but who doesn’t love fan fic?

Five out of five stars without even a shadow of a doubt.