Tim Burton has been wowing audiences with his distinct visual and story telling style or years, earning him cult and auteur status amongst his biggest fans. His stories of outsider characters trying to fit into society has touched the many people who also feel like they do not belong. He has become a voice for the freaks, the weirdos, the misfits.

I have been a big fan of Tim Burton’s since I was a kid living in a small village. A distinctly round peg, trying to fit in a very square hole, the stories of skellington men, the scissorhanded, and the plain strange were a great comfort to me, as I knew then that I as not alone in the world. Although perhaps some of his more recent films haven’t quite hit the mark (I’m still not sure what Dark Shadows was all about) his earlier work still endures and is as popular today as they ever were.

With Tim Burton’s latest release, Miss Peregrine’s Home for Peculiar Children right around the corner, I thought I would compile my top 5 favourite films of Tim Burton’s for your reading pleasure. 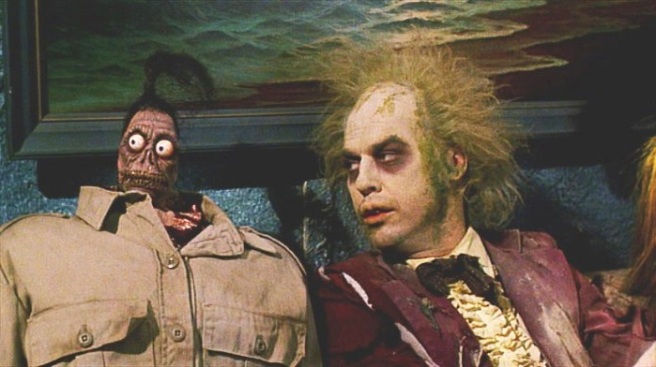 It’s the ghost with the most. Beetlejuice (Michael Keaton), the vile (but let’s face it, hilarious) human exorcist is employed by the ghostly Adam (Alec Baldwin) and Barbara (Geena Davis) Maitland to get rid of the terrible Deetz’s, who have moved into their home and taking over.

One of his earlier works this is full of that typical Burton style, there’s plenty of stripes, dark humour, wonky angles everywhere (especially in the ghostly government offices) a dark twist on suburbia, there’s even an early appearance from Jack Skellington, albeit it’s just his head on top of the merry go round Beetlejuice turns himself into. It’s a rip roaring comedy with some great set pieces and memorable scenes, not to mention a great calypso soundtrack.

The most recent of Tim’s movies to make the list, this is based on the true story of Margaret Keane (Amy Adams). Margaret was an artist in the 60s, who met and married fellow artist, Walter (Christoph Waltz). After realising Margaret’s paintings got far more attention during shows he began to pretend the works were his own, keeping the lie going for years, making Margaret work in secret, even from her own daughter from a previous marriage. Eventually the lies and secrets take their toll on Margaret and she plans to break free from her captor.

Although there are many things that might seem like typical Burton themes, the horrors of suburbia being the biggest, though I would say that visually it is very different from a lot of his other films. It’s all about bright colours, and rather than a fantasy like setting Burton keeps it real and simply for his colour palette, costumes and settings. He also explores the theme of domestic abuse, though I felt that this came secondary to the main story and could have been explored more.

From the latest, to the first. Burton’s Debut feature from 1985, might seem like a silly film about a strange man child. Really though it’s a masterclass in taking the absurd reality.

Pee Wee (Paul Reubens) has the best bike in town, it’s red, shiney, and really, really cool. One day as he’s shopping for new bike accessories Pee wee’s bike is stolen! Oh no! As you can imagine he is devastated, and sets off on an adventure of a lifetime to get it back. Along his cross country trek he meets many different people who help him to his destination. Every person is weird in their own unique way. They have a dream of some kind that sets them apart, makes them different in some way.

It might not be a film that will teach you about the human condition, or help you to learn about historical figures that lived 1000 years ago. It will, however make you laugh like a 3 year old mainlining sugar, and will provide an excellent way to spend a couple hours of your life.

Probably Burton’s biggest criticism of American suburbia. Though set at the time it was made, in the late 80s/early 90s the small community at the centre of the story often feel like they’re stuck in the 1950s, but in style and attitudes.

Edward (Johnny Depp) lives on his own in a big, creepy castle overlooking a pastel coloured community, one day a lovely lady called Peg Boggs (Dianne Wiest) wanders up to the castle, in the hopes that someone will buy her Avon products. Instead of a makeup starved housewife she find Edward, who she decides to bring down to stay with her and her family in their house. Though initially the new and unusual person is accepted by the community, though the tides turn when he does not want to sleep with one of them, and things begin to turn a little more sinister.

It’s a lesson on how suburbanites can often seem like good people, but the attitudes of the community can often be dictated by one person, and if you are not considered favourable by that one person then you do not have a chance in the community. The additional love story between Edward and Peg’s daughter, Kim (Winona Ryder) makes this a true modern fairy tale. This also marks the first collaboration between Burton and Johnny Depp.

This is my favourite Tim Burton Movie to date. It tells the tale of movie director Edward. D. Wood Jr, who was voted the worst director of all time in a 1979 poll thanks to movies such as Plan 9 From Outer Space and Bride of the Monster. If you’re not familiar with those titles, but you loved The Room, I suggest you look them up, they are a classic of the ‘so bad they’re good’ genre.

Starring Johnny Depp as the titular character this is very different from a lot of other Burton movies, there’s no campy, twee, yet twisted setting, there’s not even a Danny Elfman score (they had a minor disagreement at the time). It’s even shot in black and white, which gives it more of an arthouse and realistic feel. A large portion of the story is about how Ed is a transvestite, and about his acceptance from the people around him, this is dealt with with sensitivity and unquestioning acceptance. Most of all this is a story about one man’s passion to get his movies made, his movies are his life and without them he is nothing, yet he is always suffering setbacks and ridicule, but he keeps going, he keeps pursuing his passion no matter the cost, and that is why this is the best Burton movie.