I have a confession… I haven’t bought a movie for years. I get DVDs for Christmas but generally I just wait until a film is out on Netflix or NowTV before I watch it.

Dirty 30 was different. I’ve been watching YouTube for years now and Grace Helbig was one of the first people I ever subscribed to and of course this lead to me to following Mamrie and Hannah Hart (not related). I’ve followed the holy trinity for years now and they’ve never failed to keep me entertained.

In 2014 the three YouTubers starred in Camp Takota and after seeing many a YouTuber try to make is as an actor/actress, I was wary that my three favourites would follow in their footsteps and appear wooden and over act. Nevertheless, I bought Camp Takota (probably the last thing I bought before Dirty Thirty) and was pleasantly surprised when I found that the three women were good actresses and I enjoyed the film more than I had a lot of high budget films. 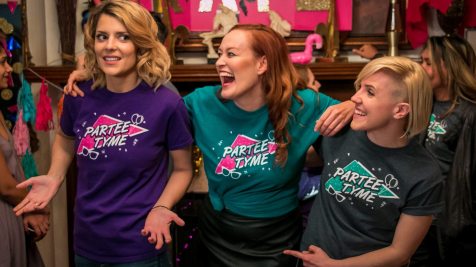 When I heard Dirty 30 was being made, I knew it was something I would eventually want to watch and I looked forward to behind the scenes on YouTube. I didn’t realise however, that I would be buying and watching Dirty 30 the day it came out because I was just too impatient to wait until it was on Netflix.

Dirty 30 follows Kate (Mamrie Hart) on the approach to her thirtieth birthday. After receiving a letter in the post which she wrote to herself as a child, she realises her life is in a rut. Kate’s two best friends, Evie (Grace Helbig) and Carlie (Hannah Hart), manage to convince Kate she should have a big party for her thirtieth in the hope that she will maybe get out of her rut.

I loved everything about this film. Not only are the main three YouTube starts great actresses but the supporting cast are excellent. Never once did I feel any of the cast were wooden and the real life friendships between the cast was clear on screen as well as they normally are off.

The story itself was great, I’m anyone’s for a bit of romance and this film was full of it with a nice helping of comedy to go with it. I loved the character of Kate and, as a 28 year old female, I felt I understood her completely as a single female just trying to work it where their life if headed. Along with this I felt the friendship between Kate, Evie and Charlie was just brilliant. They were the perfect mix of people who met in school and stayed friends despite living completely different lifestyles.

Evie and Charlie were the perfect sidekicks, I loved Evie’s constant enthusiasm, wether it was about throwing a party or helping alpacas with alopecia while Charlie’s competitive nature made for excellent comedy.

As I said, I love a bit of romance and I was completely absorbed with the romance between Kate and Dan, I spent a lot of my viewing time just waiting for them to realise their love for each other. Like a lot of Grace Helbig fans I also ship Grester (Grace and Chester See) so much and from the second Ben (Chester See) took a shot from Evie’s belly button, I was hooked.

Now I don’t want to ruin anything for those who haven’t seen the film but the ending was just as great as the beginning and middle. If you want some light humour with a good helping of romance then I would certainly recommend Dirty 30.