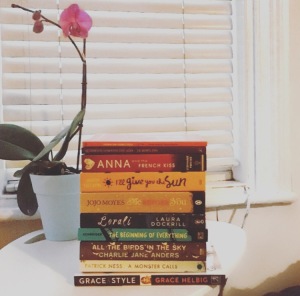 That time of year has rolled round again… I’ve turned a year older and it’s becoming less and less acceptable for me to love young adult literature as much as I do.

Once again, my family and friends have been very generous and I’ve received a few books which I’m extremely excited to read so I thought I’d share them with you and prepare you guys for my reviews in the coming months.

So here goes, these are what have been gifted to me/I’ve bought with my birthday money:

Quidditch Through The Ages (J K Rowling) – Unless you have been living in a cave for the last ten year or you have no interest in books (and if so why are you reading this?!)

then you’ll be familiar with the Harry Potter series and the fictional sport of quidditch. This book is a recreation of a book that the characters read throughout the Potter series and it quite simply tells the history of the sport

Down The Rabbit Hole (Juan Pablo Villalobos) – I’ll be perfectly honest when I tell you that I don’t know much about this book. I know that it has been translated from Spanish and that  it’s only 70 pages long. Both these facts are appealing to me. From what I know, the story follows a young boy, Tochtli, who is the son of a Mexican drug baron and shows how an innocent boy lives in a corrupt society. Like I say though, I don’t know much about it so this could all be wrong.

A Monster Calls (Patrick Ness) – I’ve heard a lot of people talking a
bout Patrick Ness and a lot of those people rave about him so when I saw A Monster Calls for £1.00 in Oxfam I thought I may as well pick it up. I have a vague idea what the book is about, it follows Connor, a kid who has a sick mother and through all the stress and worry about having to look after her he begins to have nightmares. One night Connor meets a ‘monster’ which forces him to face and confront his daemons. Now I have no idea what the monster is but I’m assuming it’s not an actual monster and with all the amazing reviews, I’m expecting it to be something pretty special.

All The Birds In The Sky (Charlie Jane Anders) – Again I don’t have too much knowledge on what this is about. I was in Waterstones with my flatmate who saw the cover and thought I would find it pretty.  I did. She then read out the blurb and I like the idea of the

Lorali (Laura Dockrill) – I was watching videos on YouTube where someone was doing their own book haul and they mentioned this. They also mentioned that it has mermaids and that’s when I realised I’ve never read a book about mermaids. Rory turns sixteen and finds a naked girl washed up under a pier but he soon comes to find out there’s more to it. More strange people begin to turn up and Rory finds himself trying to protect the girl, Lorali, who was washed up. Who also happens to be a mermaid by the way…

I’ll Give You The Sun (Jandy Nelson) – Twin sisters, Jude and Noah, were once close but a tragedy strikes and it tears the sisters apart. Once again I don’t know much more about this but I’m looking forward to finding out what tore the family apart and if they will eventually come back together (it’s young adult, they probably will.) The book has been likened to John Green and Rainbow Rowell, both authors I have read and loved so if this is even half as good as their novels then I’ll be happy.

The Beginning of Everything (Robyn Schneider) – A typically young adult book, from what I can gather Ezra is popular in school but gets in a car accident where his leg gets crushed and shattered, his girlfriend also cheats on him meaning that he becomes less popular and he finds himself sitting with the misfits at homecoming. Ezra meets Cassidy. Ezra and Cassidy fall in love but will tragedy strike again?

Anna and the French Kiss (Stephanie Perkins) – Now I love Paris, in fact I love it so much that I have an Eiffel Tower tattoo so if anything is set in Paris I will buy it, I will read it and I will love it. I don’t care if it’s awful, I will love it because it has Paris. Anna and the French Kiss is the first instalment in a trilogy, it tells the story of Anna who moves to Paris for a year to go to boarding school.  When she’s in Paris, Anna meets Etienne, a beautiful French boy who is unfortunately taken.  I’ve had people tell me that this book has one of the best 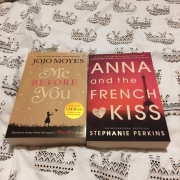 relationships in young adult lit so I’ll be reading ASAP. I mean Paris and French boys? What’s not to love?

Me Before You (Jojo Moyes) – I wanted this only because the film is coming out and I wanted to read the book before I see the film. Lou is in an unhappy relationship and she meets Will who has been in a motorcycle accident and has no will to live since he lost the use of his legs. When Will and Lou meet, they’re determined to change each other’s lives. Lou wants to show Will that he can live a happy life and Will wants to show Lou that she is bigger than the small town she lives in. I’ve been told to have the tissues ready for this one.

Grace & Style (Grace Helbig) – Now I’ve been following Grace on YouTube for years, since she was vlogging for My Damn Channel and before she went

solo. I’ve loved her since the first video I watched her in. I appreciate her humour has never changed and she has always done what she wants to do, making her YouTube channel relatable and fun. When Grace released her first book, The Art Of Pretending to Be A Grow- Up, I rushed out to buy it in order to support her. The first book was charming and fun so when book two, Grace & Style, came out I once again rushed to buy it. This book is full of advice (fashion and probably a bit of lie) direct from Grace.