If you’ve tried to follow any of the news about this game over the 3 years since it was announced you’re probably pretty confused as to what this game is. The release of No Man’s Sky has been irreversibly marred by controversy due to one of the creators Shaun Murray being a bit vague about whether or not there is multiplayer. People have been unfairly slamming the game with low user review scores, trying to claim refunds on grounds of false advertising and most disturbingly sending death threats to the development team. I can say up front with 100% certainty that there is no multiplayer at all in No Man’s Sky and honestly I don’t think that would have made people happy anyway.

So what is this game? At its most basic level NMS is a survival game, you explore an environment looking for resources to repair your ship, power your suit and upgrade your items. There have been plenty of similar games like this (e.g. Minecraft, Don’t Starve, The Long Dark) released on PC but NMS’s gimmick that set’s it apart is its huge universe that you can freely explore.

You start the game by taking control of a faceless spaceman/woman/robot who wakes up next to a crashed ship on a random planet. This serves as the game’s tutorial mission, you need to repair your ship so you can leave the planet. The interesting thing about this task is that the planet is random so you can have a pretty different experience to another person. I started out on a horrible lifeless planet with acid rain that was constantly ticking away at my suit’s life support. You have to collect various elements like iron and plutonium by mining rocks and crystals then combine them into the missing ship parts. This can take a couple of hours depending on how lucky you get with resources in the area, it becomes a sort of balancing act though because some of these same resources are also used to recharge your life support. The start of this game is very confusing, it doesn’t really make a good first impression. I think it leaves you to figure out way too much on your own which just frustrated me especially because I had to keep running back to my ship to avoid the acid rain.

Once you fix your ship you’re finally free to start exploring SPAAAACE! I got the hell off my planet first second I could, once you get past the atmosphere you should start to see some planets around the current start system you’re in. You can fly to any of these planets which is a video game dream people have had for years. Your overall goal is to journey to the center of the universe but other than that you’re just supposed to explore the endless planets. 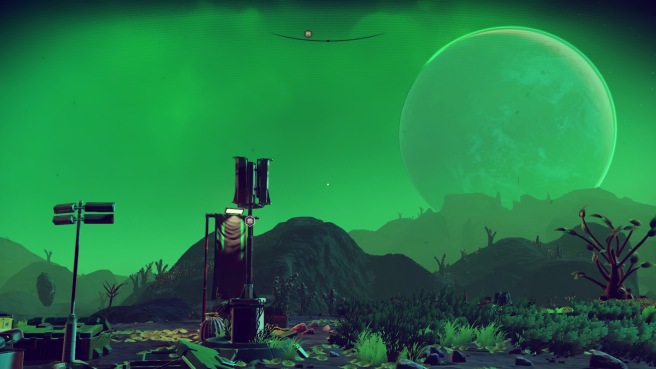 Throughout the marketing cycle they have been boasting that the game contains over 18 quintillion planets which is an almost unfathomable number if you’re not an astrophysicist. Most people playing the game will probably only see around 50-100 before they’re done so the game never really feels that big while you’re playing. I am in no way discounting the amazing technological achievement this game is however, the developer Hello Games have done some amazing things here. In the way Minecraft can randomly generate a landmass for you to play on NMS’s universe has been built in a similar way. Hello Games figured out a formula that creates planets all with random weather, animals, plants, alien buildings and oceans which is how such a small team has created something this huge. Once this had all been generated it was locked in place so everyone playing the game right now is in the same starting universe.

Fear of a Meme Planet

One of the only interactions you can have with other players is naming things you discover. If you’re the first person to discover something whether it be a star system, planet, creature, plant or rock you will have the opportunity to name it yourself. If by chance someone else were to land on your planet they would be see what you had named it. In my hours of playtime I didn’t come across anything other people had discovered, it seems as these kinds of interactions are extremely rare. How disappointing that barely anyone will get to explore the majesty of my planet Harambe IV in the Dark Naruto 420 star system but I guess that will make it a really special moment if you do find some evidence of another player.

On paper this really does sound like one of the greatest games of all time but unfortunately it’s just not that much fun. I ended up getting stuck in a rut just doing the same things over and over again. I would enter a star system, land on the nearest planet, look for a inventory upgrade, sell all my extra items then do it all again. There are definitely others things I could have been doing but none of it felt worth it. 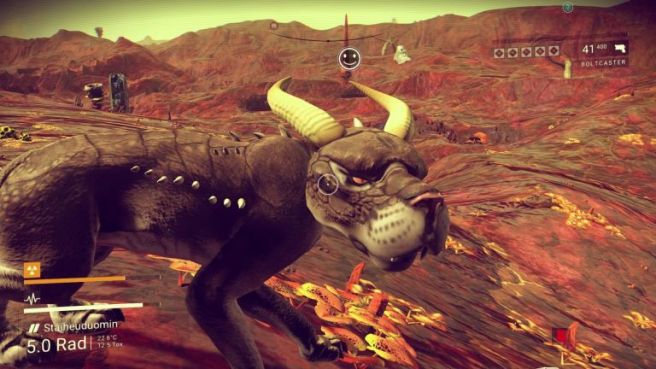 They give you a very vague path to follow which I guess you could call a story but unfortunately it all amounts to nothing. After a while I found myself skipping planets which is not something I wanted to do but they don’t give you enough incentive to explore. A lot of the planets have the same buildings and alien ruins on them and there are no quests or missions to found on the planets. If you meet another alien they usually just give you a random item recipe or teach you a bit of their language so you can eventually understand what they’re saying. The aliens have actually been my favourite part of the game. They found a way to make them really charming even though for most of the game you can’t understand what they’re saying to you. 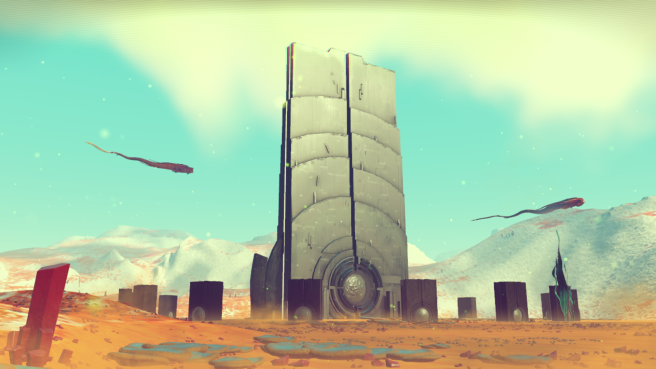 This game works much better as a passive activity, if you’ve got some music or a podcast to listen to while you play you’ll probably see less of NMS’s downsides. This game was just a bit of a disappointment for me. I didn’t have any ridiculous expectations like some other people on the internet but I did expect it to be more of a rewarding experience. I’ll definitely come back to it from time to time because it can be a beautiful game and it is a pretty amazing technical feat.